Set in Glasgow, Jessie Buckley plays Rose-Lynn Harlan – it’s her last day in prison and she’s just getting ready to leave; before her departure we see Rose getting a tag attached to her ankle.

Rose heads home stopping by her boyfriends first before going to her Mum’s house (played by Julie Walters) We soon learn Rose’s Mum has been taking care of Rose’s two young children while she’s been inside for the last year….

Both Walters and Buckley do a believable Glasgow accent.

To say the reunion is tense is an understatement; Rose’s two little children are clearly upset with their Mum leaving them for all this time… Rose’s Mum wants Rose to get her life sorted out and get herself a decent job; Rose has only one thing on her mind and one thing only…. She dreams of going to Nashville and becoming a Country singer. (not country & western, but Country)

Quote: “I should have been born in America,” insists the unruly Rose-Lynn, reminding us that “Johnny Cash was a convicted criminal”.

Rose is a fab character to watch & equally a bit annoying; she’s cheeky, pushes things to the limit to the point she makes you feel nervous on her behalf but more than anything this girl can sing!

To earn money to afford to move into her own flat with her two children, Rose gets a cleaning / house-keeping job in a beautiful huge suburban house where she meets Susannah (Sophie Okonedo) her two children and husband…

lots of laughs while Rose hoovers, head-phones on as she sings along to yet another Country classic. When Susannah pops out, Rose decides to take her own tour of the house and conveniently finds the well-stocked drinks cabinet! (oh yeah) Susannah’s children arrive home from school to find Rose belting out a song, vacuum cleaner in tow..

Rose shares her passion for Country and her dream of going to Nashville with Susannah but never tells Susannah where she’s really been for the last 12 months and that each night she heads home to her own two children….

When Susannah sets up a recording of Rose singing via the internet she is moved to tears at Rose’s voice; she decides to help Rose by arranging a ‘crowd funding gig’ at her own 50th birthday party she is holding in her garden… Rose will perform with a band at the party and instead of gifts her friends can donate to help Rose finance her trip to Nashville.

Rose is so excited at this chance and even though she promised her children she would spend time with them over the school holidays she ends up dumping them on neighbours and friends to babysit to allow her to rehearse each day. These are truly tough scenes as you can see the kids going through the on-going disappointment they have every time there is a glimmer of the Mum they want and need, she lets them down again & again; thinking of herself..

The night before Susannah’s party, Rose’s little boy has a horrible accident and ends up in hospital….. Rose is aware she hasn’t slept all night and has to make it to the party to perform! She calls her Mum, Julie Walters and explains she needs to go… Once again it’s Rose’s Mum who is left to look after the children….(& yet again another tense exchange between Rose & her Mum) Rose leaves the hospital.

Rose is clearly upset with herself as she adds more & more black eyeliner to her eyes, trying to stop the tears washing away her make-up

The party in Susannah’s garden is in full swing; a stage is set up, guests are buzzing in anticipation to hear this singer sing…. Susannah is getting anxious when finally Rose arrives; she’s obviously not herself and is extremely distracted..

The band starts to play the intro to the first song but Rose just can’t do it and walks off stage; Susannah asks her what’s wrong and finally, Rose admits she’s been in prison for the last year and has two little children of her own….. she runs off and leaves Susannah and her party.. 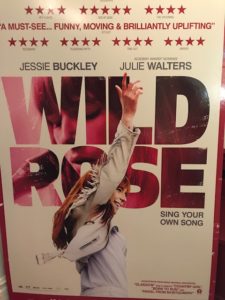 As with all of my reviews I never want to share the whole story and especially an ending… to be honest, this movie keeps you guessing and actually there were a couple of times when you think ‘Ahhh, great ending’ and then they add just a little bit extra to make the story complete but definitely not in a clichéd way…

Loved this movie; it had everything in it – fantastic performances, great singing, tense relationships played so realistically between Julie Walters and Jessie Buckley, laughs and some truly touching moments..