Like a lot of ‘politically’ based movies you really need to have your ‘concentrate’ hat on and ‘The Post’ is no exception. The huge appeal to see this particular film was the fantastic calibre of Director – Spielberg and his main stars, Streep & Hanks. (there’s also an excellent supporting cast)
It’s the first time all three have worked together; I know I was surprised at that little fact too. 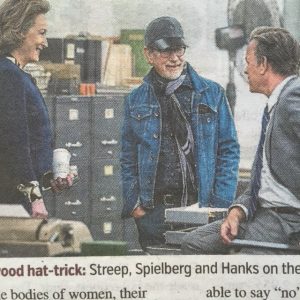 The film is set early 1970’s and tells the true story of how the newspaper ‘The Washington Post’ struggles with the decision to publish ‘top secret’ papers regarding classified information relating to the Vietnam War..
Meryl Streep plays Katharine Graham the owner of The Washington Post – her father had owned the newspaper and then her husband… Katharine took over the newspaper when her husband committed suicide. She knows what she’s doing plus has such a bond with basically what is the family business, however, it’s frustrating to see her second guess herself and not have the confidence within this male dominated world! 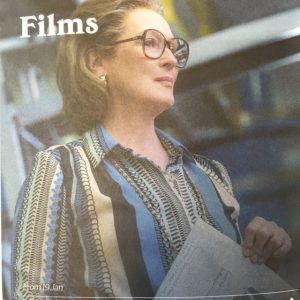 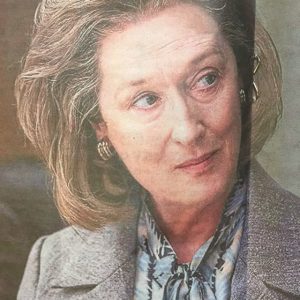 Tom Hanks plays Ben Bradlee, Editor of The Washington Post – he’s aware that their main rival The New York Times are working on a massive scoop and basically wants in on the action…
This is when the movie turns into more of a political thriller – it’s nerve-wracking as one of the reporters meets with the main source to collect ‘the papers’ and bring them back to Ben’s house where a small group of reporters try and read through the vast amount of paper-work which isn’t in any kind of order?! They are basically reading top secret government papers about the Vietnam War and only have a few hours to put their piece together and try and get the ‘go-ahead’ from the boss of the company Katharine Graham. 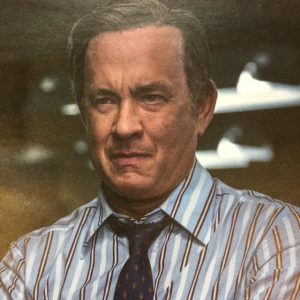 The newspaper’s lawyers advise the team of reporters not to go-ahead and publish as the Government may bring criminal charges against them which could lead to prison…..
Katharine is hosting a large gathering at her house when the calls comes in from Ben, she gets all her trusted ‘men’ around her including the newspaper’s chairman and tries to make one of the biggest decisions of her life – ‘whether to publish these papers’ or not? Spielberg is fantastic at orchestrating such a stressful and tense fuelled moment…
Katharine goes with her gut and finally believes in her own decision and chooses to ‘run the story’…. 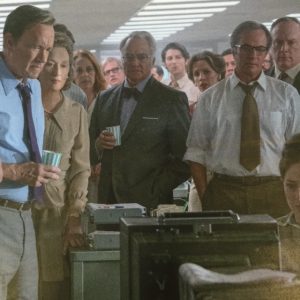 What I really enjoyed about this film was how fantastic the actual ‘day to day’ running of a newspaper back in the 70’s was captured; I actually read that the only 3 Linotype machines which were still in service were in a naval shipyard close-by to where they were shooting the movie.
(The linotype machine (/ˈlaɪnətaɪp/LYN-ə-typ) is a “line casting” machine used in printing. Along with letterpress printing, linotype was the industry standard for newspapers, magazines and posters from the late 19th century to the 1970s and 1980s, when it was largely replaced by offset lithography printing and computer typesetting.)

I equally loved all the scenes which take place in the main characters homes – the high society parties held at Katharine Graham’s very beautiful and up-market home and also Ben’s house with his wife and daughter; this is what gives the story it’s heart….

All in all, you really are in ‘safe hands’ with Spielberg at the helm and Streep & Hanks confident acting..