Like many of us I have a genuine fear of Clowns; they really freak me out so why I hear you say would you put yourself through A. any scary movie & B. a scary movie whose main character is probably one of scariest clowns EVER!!!
Not sure is the answer to that….. some weird fascination I guess!?! And something to do with ‘It’ being a Stephen King story….

The scene is set on a very rainy, grey afternoon in a small American town called Derry…. Cute little Georgie’s older brother Bill is making a small paper boat for Georgie to sail down the side of the pavement whilst the rain is flowing like a river… Georgie is so enthusiastic and waves goodbye to Bill as Bill waves back from his bedroom window…. Q, scary suspense music and that feeling you just know something bad is about to happen…

The camera follows Georgie (in his iconic yellow rain jacket) as he runs after the little boat, carefully watching it’s every move until the boat disappears down a drain!! Georgie is so upset and kneels down to see if he can spy the boat but is met instead with two glaring eyes!! Oh my word! No wonder Georgie leaps back, this is the first time the audience comes face to face with Pennywise the monster whose main guise is that of a dancing clown….. the scene is so scary and yes you guessed it poor little Georgie is grabbed by the Clown and dragged down to the sewers.. (I won’t go into detail re: this scene as it’s best to let you see for yourself exactly what happens) 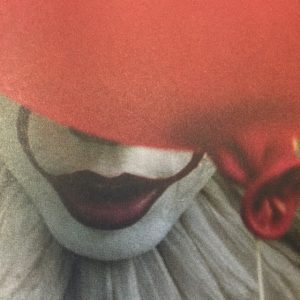 Each kid has his/her own hang-up and fear – this is not the usual group of cool kids
who usually head-line in movies but a fantastic (real) bunch who come together and end up calling themselves ‘the losers club’ with Bill I would say as the ring-leader.. along with each of their own fear and anxiety in life, the poor ‘losers club’ are also being hounded by a horrible gang of boys! Gosh this town is tough!

The story cleverly shows each of the kids experience scenes on their own where their fear manifests itself and then changes back to yes, you’ve guessed it Pennywise.. Terrifying….

One of the boys, Ben, due to being a newbie in town spends a lot of time at the library and starts to research the happenings in Derry…. It turns out a lot of bad stuff has happened historically and it seems to take place every 27 years!!!

The ‘losers club’ become closer when they realise each of them have had an ‘experience’ where their anxiety and fear takes over and Pennywise appears…. With this new found knowledge and Bill’s personal grief over knowing exactly what happened to his little brother Georgie the kids decide to face their fears and track down the monster, Pennywise…. 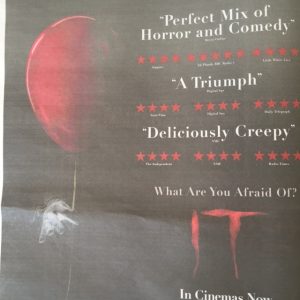 For me, this was much more than your typical horror/scary movie – my highlight was definitely the fantastic young cast… each one of them brought their own story to the film and you completely believed in them… there were some funny bits as well you’ll be glad to hear and fantastic music which increased the levels of suspense at all the right times….

The kids relationships with each other are spot on and you can’t help but really warm to each of them. Bill Skarsgard who plays Pennywise has totally put his own spin on this horrendous character thanks must also be given to the brilliant make-up people. Wow!

This is only Chapter one of the story…… as I mentioned earlier, bad things happen in Derry every 27 years so lets hope part two is as equally watchable and yes, a little ‘scary’.