Watched at The Cameo

Set in rural Virginia during the Civil War the movie opens with a young girl foraging in the woods collecting mushrooms; she’s startled when she comes across a wounded Yankee soldier, a deserter….. He reassures her not to be frightened and she decides to help him back to the Boarding School where she lives.

As they reach the entrance and she calls out to Miss Martha (Nicole Kidman) he collapses… The house is a beautiful Boarding School where most of its residents have now left,(because of the war) leaving only Miss Martha, a teacher Miss Edwina Morrow (Kirsten Dunst) and five young female students.. At first the group are a little hesitant on what they should do; however, Miss Martha decides they should bring him inside and she will attend to his leg wound…

One of the girls suggests they hand him over to the Confederate Army but Miss Martha feels he should be given the time to recover before any decisions are made. 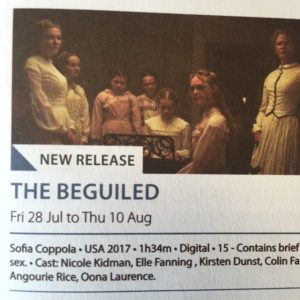 The man is Corporal John McBurney – wonderfully played by Colin Farrell (a role in my opinion which was made for him!) You watch Miss Martha clean his wound; she becomes a little nervous whilst in the presence of this attractive stranger (even though at this stage he is still unconscious)… As the days pass and John becomes a little stronger all the girls and woman visit him as he convalesces; they start to become more and more fascinated by the charming ‘roguish’ soldier, bringing him presents and trying to work out who he likes best..
Over the coming days and weeks John becomes stronger and you see him chatting to the girls and women as they fight for his attention…. Miss Martha even asks him to join them all for dinner and evening prayers..

As John is now up and about he fears he will have to return to the war so offers his invaluable help in the garden. When Miss Martha suggests he is well enough to leave the Boarding School in a few days John quickly suggests he become their full time gardener which is refused…. Whilst recovering John has also been on full ‘charm mode’ to the rather quiet Edwina Morrow, the teacher played by Kirsten Dunst… As his time at the school is coming to a close he takes the opportunity to tell Edwina he has fallen for her and he will visit her that evening in her room….
‘Oh my’…..(in my best Southern drawl….) 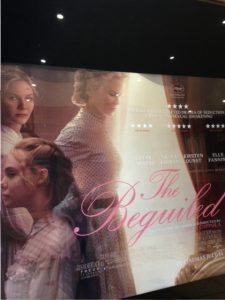 This is where the almost ‘fairy-tale’ story drastically changes pace and turns to the dark side….
I really don’t want to spoil it for you so to find out how it ends get yourself along to The Cameo or The Filmhouse and enjoy this rather wonderful ‘Southern story’…

Thoughts – I thoroughly enjoyed everything about this movie, from the beautifully shot scenes which transported you to Virginia to the gorgeous pale costumes the female characters wore… Nicole Kidman looks so at home in this era.
Great cast, fantastic story and just that little bit bizarre…