Bizarre but extremely watchable psychological thriller…… I was keen to go see this movie as I had read a little about it per my Cameo, Picturehouse guide; thought it sounded ‘different’ & always find Kristen Stewart interesting to watch…

The movie was showing at the Cameo, Screen 3

Kristen plays the part of Maureen a ‘Personal Shopper’ for a wealthy client based in Paris. Maureen’s twin brother had recently died and as both twins felt they had strong connections with the spirit world, Maureen wanted to test her ability and find out if her brother will communicate with her…

Staying the night at her brother’s old house (on her own) – these scenes are so spooky!!
The dead brother’s girlfriend wants to sell the house but keen to find out if his ‘spirit’ is still residing there before moving forward with the sale. 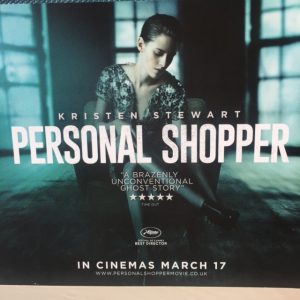 The story develops with Maureen travelling to London to collect some ‘designer pieces’ for her client whilst being hounded by weird text messages from an ‘un-known’ who seems to have knowledge of her every move…… is this person real or beyond the grave?

This movie is full of suspense, completely ‘different’ and I couldn’t think of another actress who could have brought so much to the role of Maureen.

Viewed at the Cameo..

I know it’s not the best thing to admit to going to see a movie based on the actors who are in it but hey ho, we all do it from time to time…. To be honest I’m not usually a fan of Science Fiction films but I am a fan of Jake Gyllenhaal so me and my chum headed along to the Cameo and kept an open mind.

It was described as a Sci-Fi / Horror – the ‘horror’ part did make me a little nervous but my scarf was at the ready to cover my face as soon as the dodgy music started….

The movie is set on the International Space Station with a crew of 6 (a very attractive crew might I add) – it cleverly gives you a little profile of each crew member to add a back-story…. Their mission is to study and examine a sample of soil from a space probe returning from Mars – what will their discovery find??
DUN-DUN-DUUUUUN!!!

Hugh, the British biologist is in his element carrying out tests on the cell which was taken from the sample – the crew watch it grow; all smiles and full of excitement / reports of the ‘life-form’ is being shown back on earth and a group of school children in the US give it a name ‘Calvin’.

I won’t spoil what happens next…..

Over-all, we’re glad we went to see it; watchable and excellent twist at the end and finally, Jake didn’t disappoint – he really can play any part extremely convincingly.